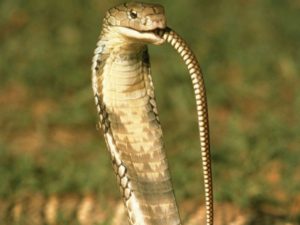 Glue traps are highly rated as a means of trapping a snake and getting it out of your area without having to kill it. Simply place the trap under a porch, or any covered area snakes prefer and it won’t be long until a special scent draws the snake right to it. Once the snake crawls through the opening it will be held securely by the glue and remain trapped until it’s released. Turning the snake loose is easy to do and the entire process is hands-free. Simply spray cooking oil on it and this will cause the glue to weaken so the snake can get free, and the oil does no harm to the snake.

Another fairly easy way to remove snakes humanely is minnow traps. Yes, the kind of traps live fish bait is kept in does work for trapping snakes as well. Depending on how many snakes there are to deal with, minnow traps are much more cost effective than replacing the glue pads in other traps would be. Minnow traps are made of wire mesh with holes at either end that are inverted within. Putting eggs in as bait works well, the snake crawls in to get them and can’t get back out.

The downside of using a minnow cage is dealing with the snake once it’s trapped inside. Once the trap is opened, there is nothing to prevent them from crawling in any direction they choose. For this reason, if you suspect the snake you’re after is venomous, you may want to consider a safer glue trap. Freeing a snake isn’t dangerous as long as you remain alert and ready to move in an instant if it’s a venomous species.

Choose the release spot carefully and be sure to wear gloves, long pants and solid shoes. Whether the snake is venomous or not, those fangs are going to be sharp and painful. Most snakes are going to be glad just to crawl away, but it doesn’t hurt to keep a close eye on it and be ready to jump out of the way just in case. A release spot without a lot of rocks or anything else to trip over is probably a good idea. 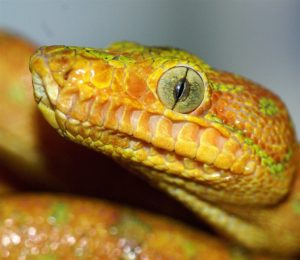 Freeing a snake from a minnow trap is as easy as opening it and letting them crawl out. They open in the center, and all you need to do is leave just enough room for the snake to crawl out and be on its way. There is another way to remove a snake but this method is recommended for professionals only.

A long handle with a curved open end works well if you know how to use them correctly. The snake is scooped up and quickly deposited into a container for safe and humane removal. This method may work but it also increases the chances you will touch the snake at some point or other so you need to remain constantly alert while attempting this, or call professionals who know exactly what to do.