Bats can show up anywhere but they are commonly found in attics because that kind of environment is perfect for them. They generally don’t make a lot of noise but there are other, more obvious signs to be aware of. It doesn’t take that long for bat urine and feces to begin producing a horrible smell and even if you haven’t seen any sign of their droppings, the odor alone will let you know they are close by.

Bats are known carriers of rabies but the biggest danger of having them indoors with people is their natural dander, fragments of droppings, and a host of bacteria being pulled through the duct system of a building along with the air. Once in the ventilation system, this contamination can spread throughout the building. This could be a major health issue for comparatively healthy humans, and anyone in poor respiratory health, to begin with, would be in even more danger.

Finding their entrance into a building isn’t hard when you know what to look for. Surface areas around them will have a shiny, polished look from the bats passing through and rubbing against it. Also, look for slightly sticky stains which will be bat urine. It will be yellow/gray to blackish/brown in appearance and may have bat hairs mixed in with it. Once all entries have been located, clearing them out isn’t that difficult. If you can’t handle the bat infestation on your, you can call the professionals at Wildlife Inc. 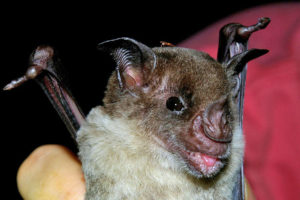 The most humane way to remove bats is through the use of a one-way bat valve. These devices can be trimmed to fit neatly over exits and work by allowing the bats to leave, but not to re-enter. They are not harmed, but this forces them to find another roosting place. As long as you follow through and make certain every possible entry into the structure is “bat-proof,” the problem is solved without killing anything.

Poison is not an answer. It will kill them, but when they die their carcasses can be as big a health issue as live ones. Forcing them to move on is far kinder, and much better for human general health. You may catch a few with live traps but when there could be dozens or even hundreds of them, traps are not the answer either. Getting a bat to leave on its own is no problem since it will do so every night to feed. The trick is in preventing them from getting back inside later.